Posted on Jun 05, 2020
At the start of 2018, Kim Kardashian West explained on Keeping Up With The Kardashians how her husband Kanye sent her an email saying: "You cannot wear big glasses anymore. It’s all about tiny little glasses." and in the year 2020 tiny little glasses are still a fashion staple.

Before Gigi and Bella Hadid, Kaia Gerber or Kendall Jenner were pioneering teeny-tiny shades, this eyewear trend was mostly the domain of ‘90s sci-fi movies. Most recognisably Neo, Trinity, and Morpheus of 1999 film ‘The Matrix’.

With the fourth Matrix film officially headed into production this year and due out in 2021, we want to get you ready with our top picks of Matrix-inspired sunglasses.

The original Matrix glasses were handmade by eyewear designer Richard Walker of eyewear company Blinde Optics. He wanted the glasses to be very futuristic and different from anything anyone had ever seen before. In turn, he designed one-of-a-kind metal frames for each character in the movie.

If you fancy yourself alongside Keanu Reeves, Laurence Fishburne and Carrie-Anne Moss then we recommend these sunglass designs: 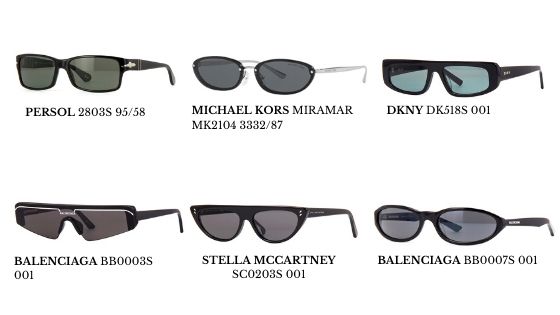 If you have never seen The Matrix then, ‘Unfortunately, no one can be told what the Matrix is. You have to see it for yourself’. BUT, a very brief overview of the movie is Neo (played by Keanu Reeves) believes that Morpheus (played by Laurence Fishburne), can answer his huge question ‘What is the Matrix?’.

This isn’t made easy due to Morpheus being considered to be the most dangerous man alive... Neo is contacted by Trinity (played by Carrie-Anne Moss) who takes him into an underworld where he meets Morpheus and they fight for their lives against an organisation of secret agents… These ‘Agents’ are sentient computer programmes disguised as humans… Are you still following us?

Anyway, the Agents are always seen wearing sunglasses as sunglasses hide their eyes and reflect those who are being looked at… Then when Keanu Reeves enters this new world, his sunglasses serve as protection against the dangers and surprises he encounters during this journey.
We also offer protection [from UV Rays more so than surprise encounters] with these futuristic designs: