Home > The PRETAVOIR Blog | Stay Up To Date With The Eyewear Industry > What Sunglasses Do Kylie Jenner, Kendall Jenner & Kris Jenner Wear?

Keeping Up With The Jenners...

Posted on Aug 24, 2020
Following on from Friday's 'Keeping Up With The Kardashians' blog post, we are looking at the Jenner's style!

As mentioned in last week's post the Kardashian and Jenner dynasty are the royal family of reality TV, their household is made up of beauty entrepreneurs, models and lawyers. Not to mention their obvious talents as television personalities and social media stars.

Keeping Up With The Kardashians is now moving onto its nineteenth season and there appears to be no end to the stream of family drama.

In preparation for the new season airing this year, PRETAVOIR are going to go through the favourite sunglass designs of Kris, Kendall and Kylie Jenner.

If you ever spot one of the Kardashians or Jenner wearing a pair of glasses you fancy, just send us a message and we will try and help source them for you! We feature the family regularly on our 'As Seen On Stars' page, click her to view what eyewear designs your favourite celebrities are wearing.

The Kardashians and Jenners have been on our screens since 2007 when Kendall Jenner was just 11 and Kylie Jenner was only 10. The sisters have basically been in the public eye for their whole lives. They are the daughters of Kris Jenner [mother to Kourtney, Kim and Khloe] and Caitlyn Jenner who is a retired Olympic gold medal-winning decathlete.

Who Is Kris Jenner?

Kris, the matriarchy or as in her own words The Kardashians’ Momager [yes, that means Mom and manager], runs her own production company ‘Jenner Communications’. She married Robert Kardashian in 1978 and together they had Kourtney, Kim, Khloe and Rob. She was a flight attendant at the time but gave up her career to focus on her family. Just one month after divorcing Robert in 1991, Kris married former Olympian Bruce Jenner now known as Caitlyn Jenner. Now 64, Kris Jenner is music manager Corey Gamble.

What Sunglasses Is Kris Jenner Wearing?

Kris Jenner is famous for her monochromatic power-suits and perfectly accessorised glasses. Very frequently Kris is photographed in sunglasses, and at this rate we could just call the Porsche Design 8478's the Kardashian Aviators.

Kris Jenner is frequently seen wearing the 8478 D's in a size 69mm making the extremely oversized and she either owns several models or a range of lens sets as the 8478's have interchangeable lenses. The reflective lenses are a firm favourite with the Kardashians and Jenners. Kris is also partial to CELINE and Saint Laurent frames - usually opting for black, angular, square frames. 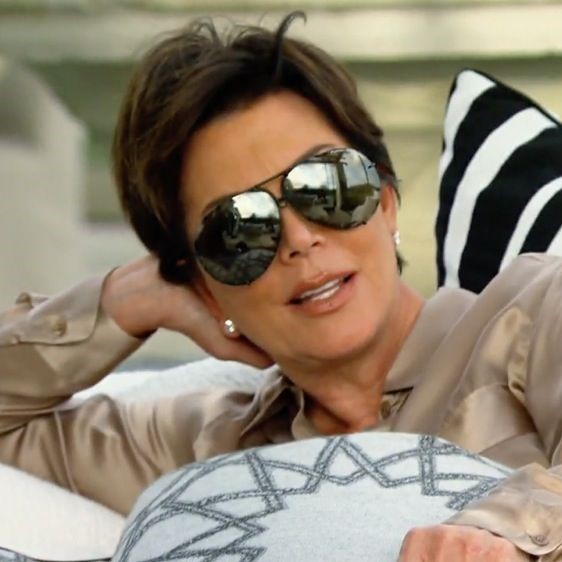 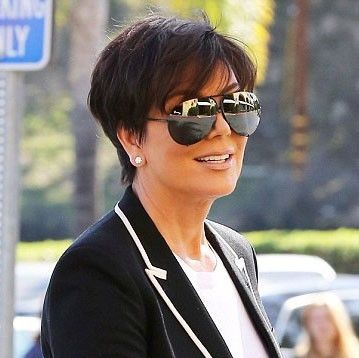 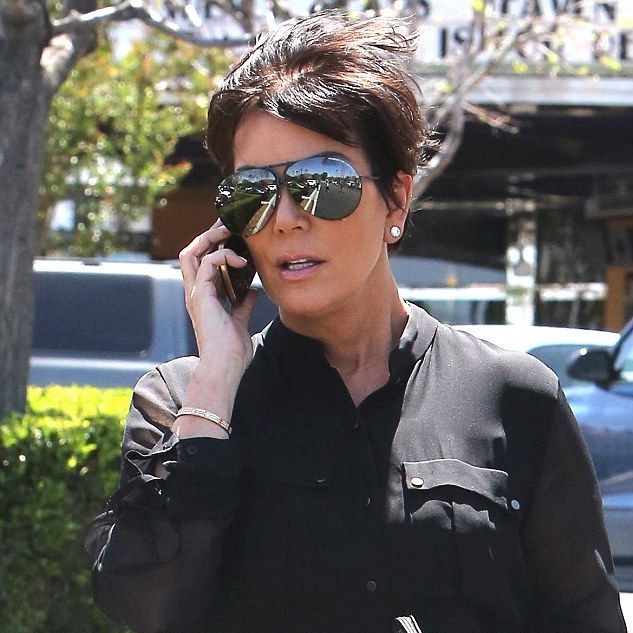 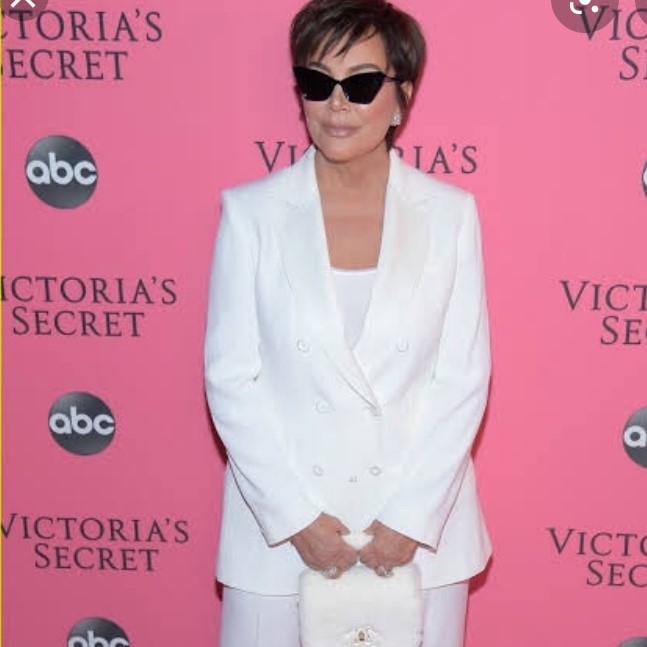 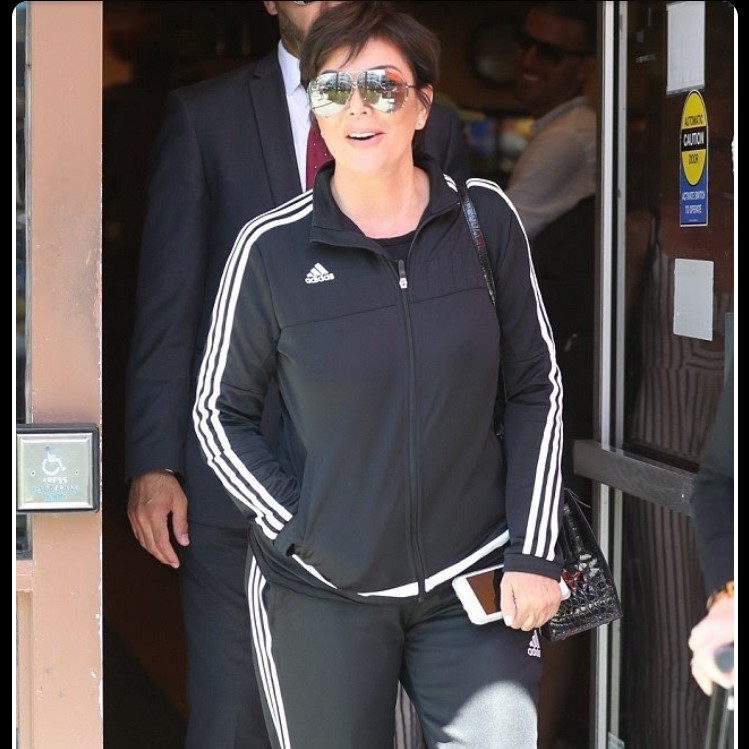 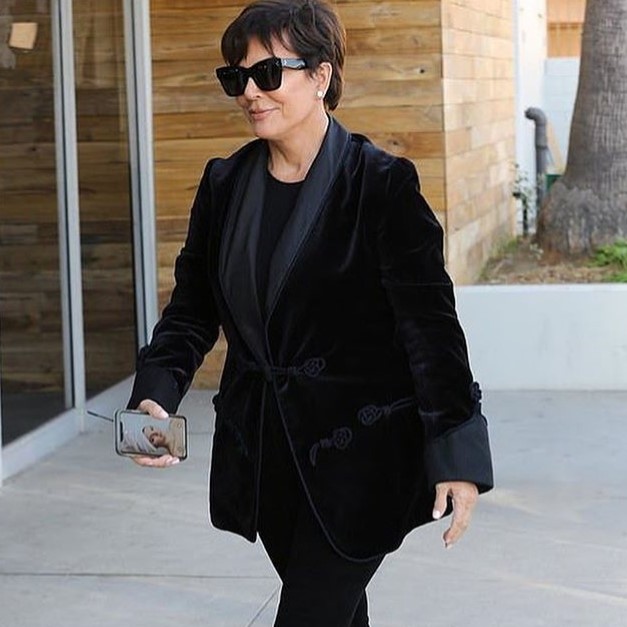 Who Is Kylie Jenner?

Kylie Jenner is the youngest Kardashian and officially the world's youngest self-made billionaire all thanks to her beauty brand, Kylie Cosmetics. Kylie’s lips have been a huge talking point for years and she totally capitalised on it with her lip kits which was just the starting point for Kylie Cosmetics, now the range includes everything from lip kits to skin care. Kylie has her own reality show which was an eight-episode mini-series called Life with Kylie which aired on E!

She has a baby girl named Stormi with rapper Travis Scott, and famously kept her pregnancy out of the public eye for nine months. At just 23, Kylie branded as ‘King Kylie’ has collaborated on fashion ranges for both Topshop and Pacsun with her sister Kendall. The pair also launched their first clothing line KENDALL + KYLIE.

What Sunglasses Is Kylie Jenner Wearing?

Kayne West deemed Kylie 'his inspiration' when it came to his Yeezy collection which consisted of sweat pants, crop tops and oversized t-shirts. Kylie's style is quite laid back opting for more neutral basic items for her day-to-day ventures but can be seen being totally extra for special occasions or an Instagram post. Kylie has probably the most eclectic range of sunglasses in her wardrobe ranging from Dior to CELINE to Porsche Design.

Again, she is a fan of strong oversized frames, quite often with a flat top and oversized lens. She has been seen several times in the Dior Reflective collection which comes in a range of amazing metallic and mirror lens/frame compositions.

Click on each image to view Kylie Jenner's sunglasses. 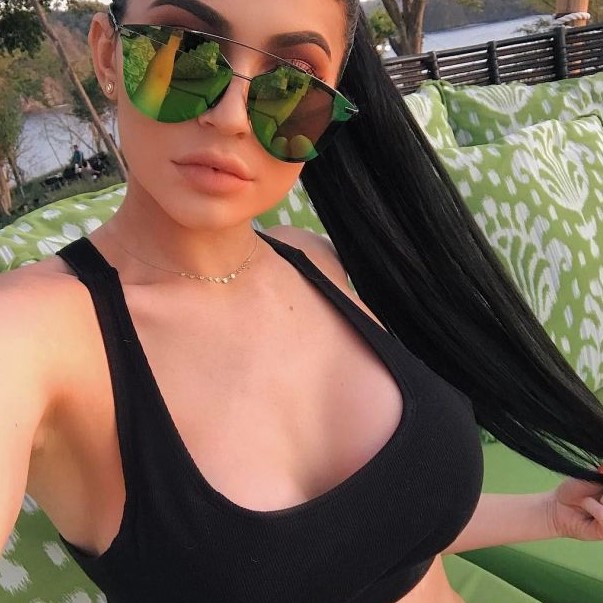 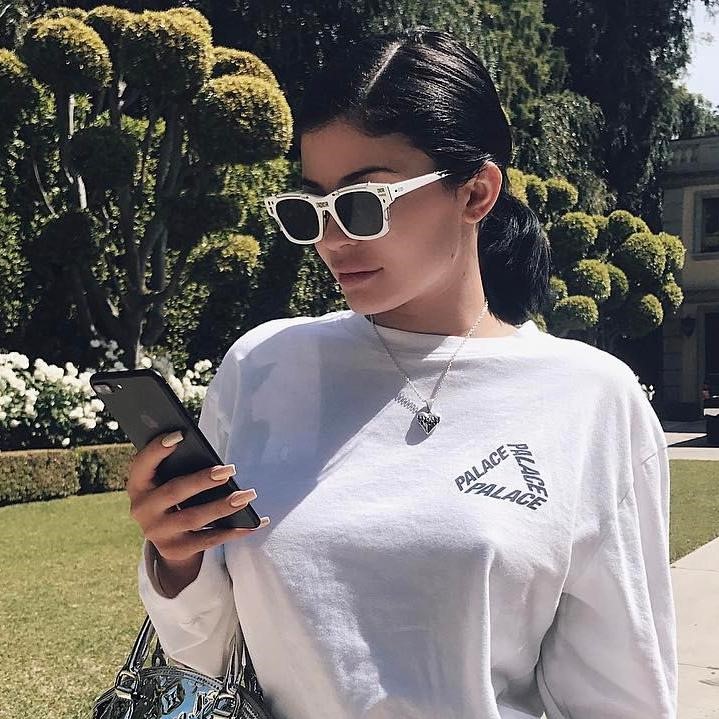 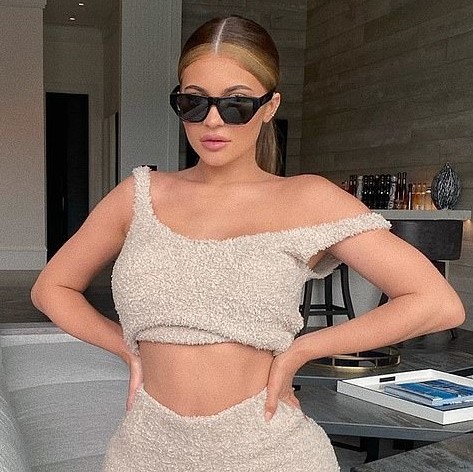 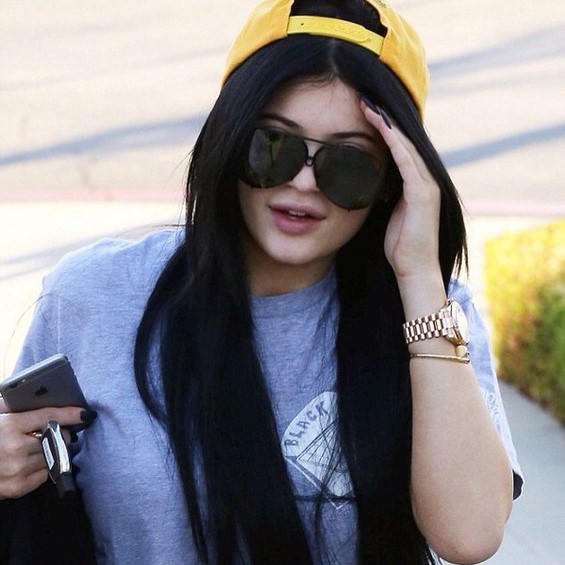 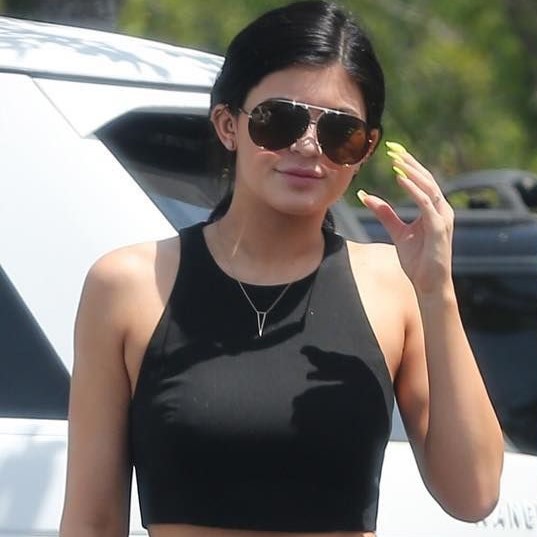 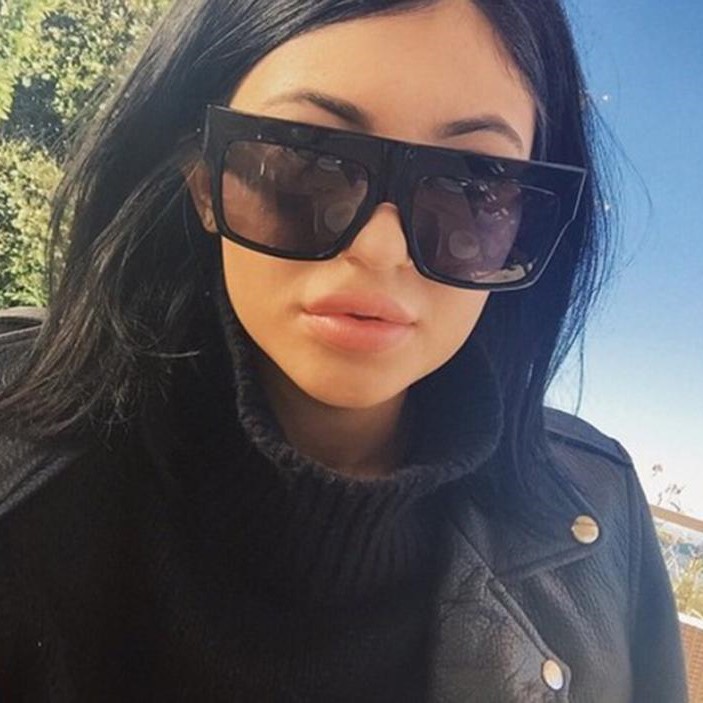 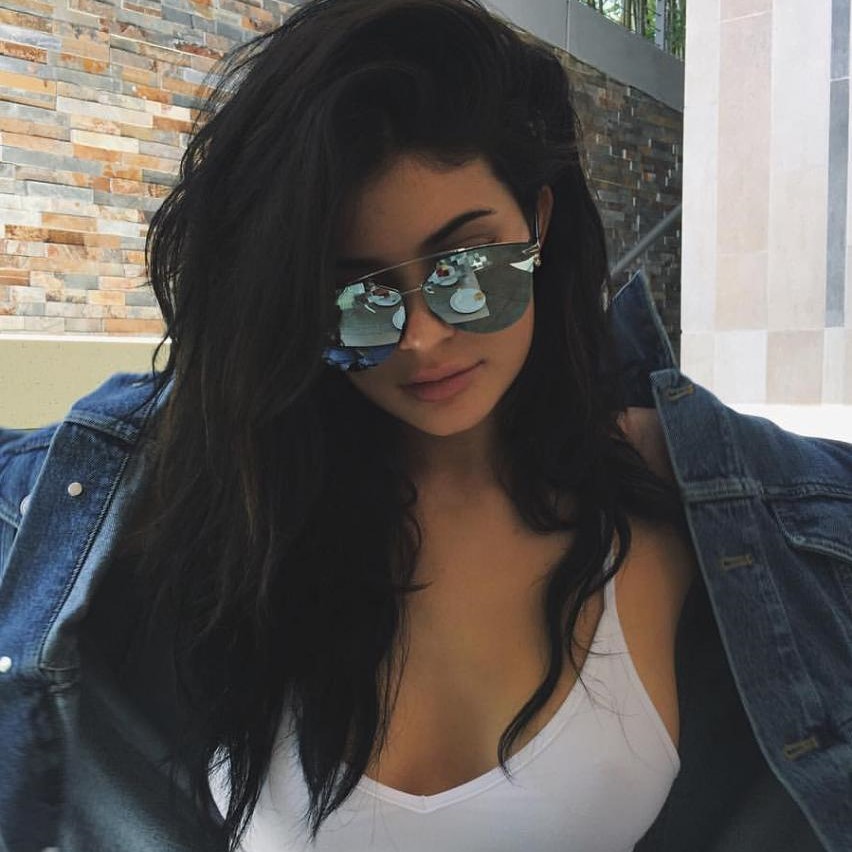 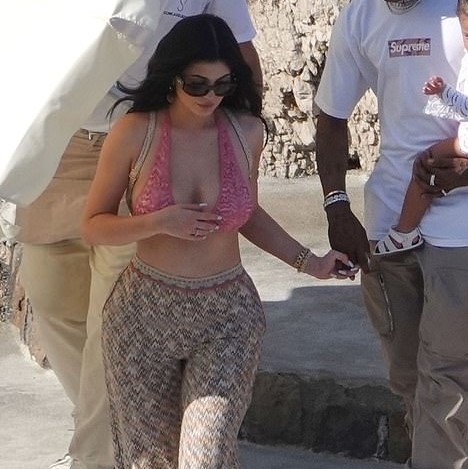 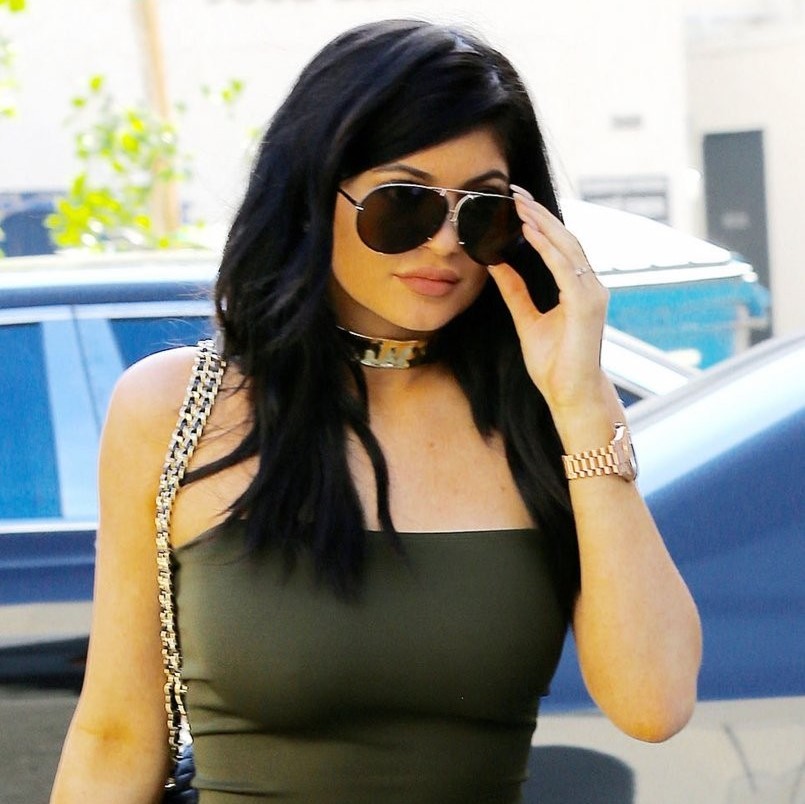 Who Is Kendall Jenner?

Kendall is Kylie’s older sister - daughter of Caitlyn and Kris Jenner - a modern-day supermodel, as soon as she entered the modelling industry she shot into stardom and became one of most in-demand models. At just 24, she has walked on numerous catwalks and appeared in several campaigns for Chanel, Karl Lagerfeld, DKNY, Longchamp, Calvin Klein and Marc Jacobs.

Unlike her sisters, Jenner remains largely quiet about her love life, though she has been linked to rapper A$AP Rocky and basketball stars Blake Griffin, Ben Simmons and Devin Booker. Instead Kendall is more public about her associations with famous friends such as Bella and Gigi Hadid, Cara Delvigne and Taylor Swift.

What Sunglasses Is Kendall Jenner Wearing?

Kendall Jenner's style is very chic, usually inspired by street style she is often seen mixing beautifully tailored pieces with leisurewear and bold accessories. She is often seen sporting sunglasses and does not appear to be particularly brand loyal wearing a range of designers such as Balenciaga, Alain Mikli, Givenchy, Oliver Peoples, Karen Walker and Le Specs.

Kendall opts for more narrow frames with unique detailing and she is a strong advocate for the micro sunglasses trend.

Click the images below to see what sunglasses Kendall Jenner is wearing. 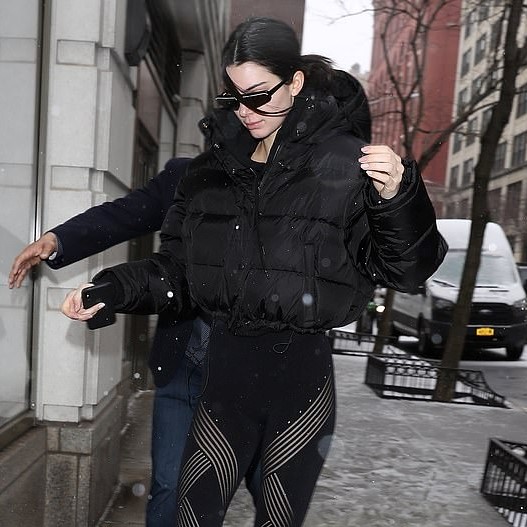 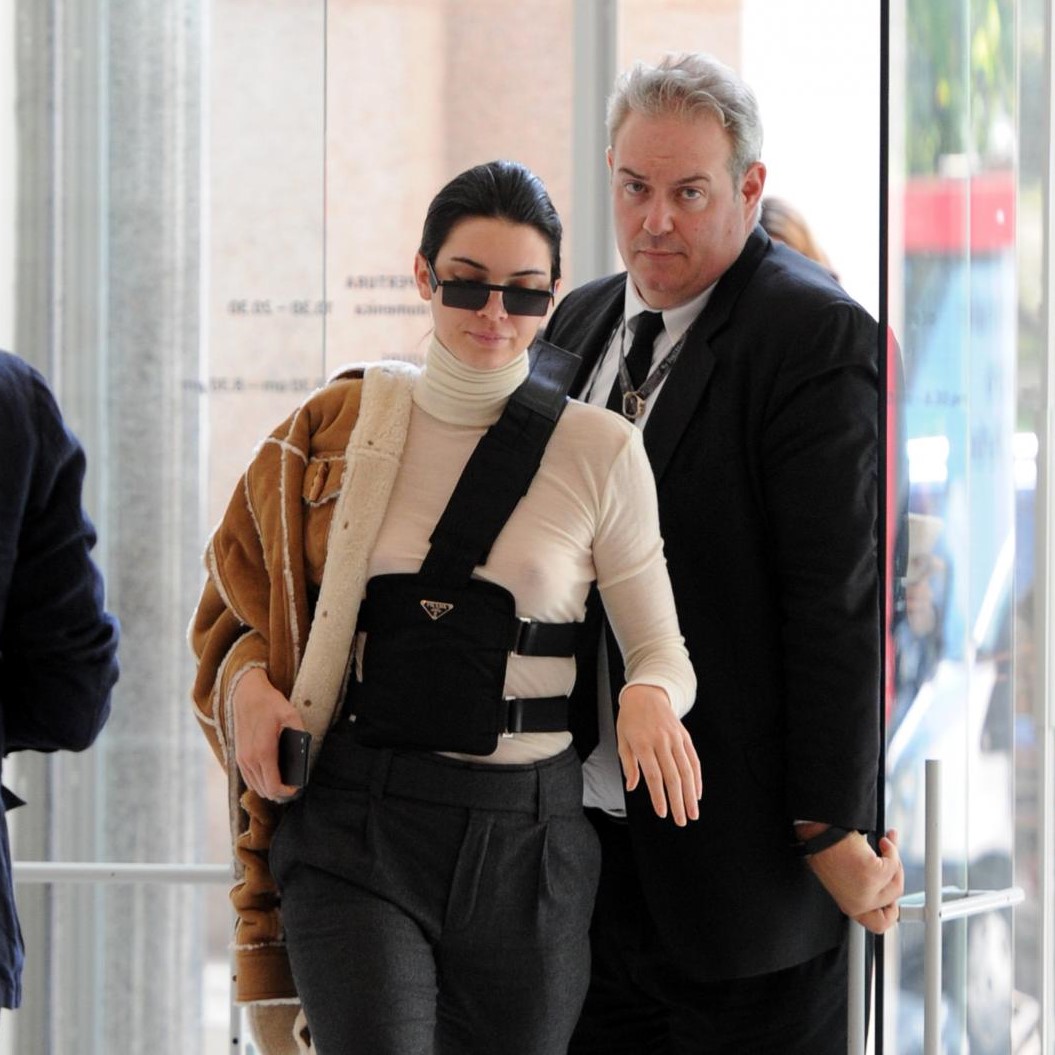 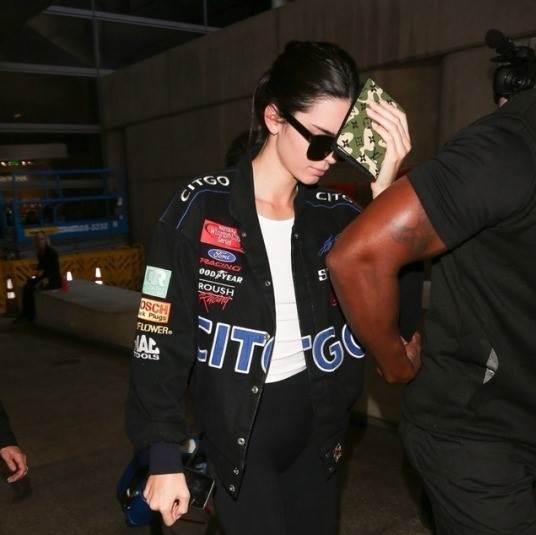 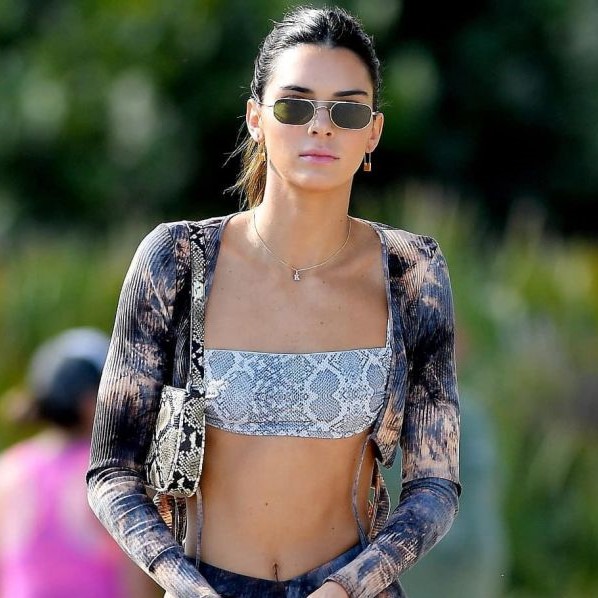 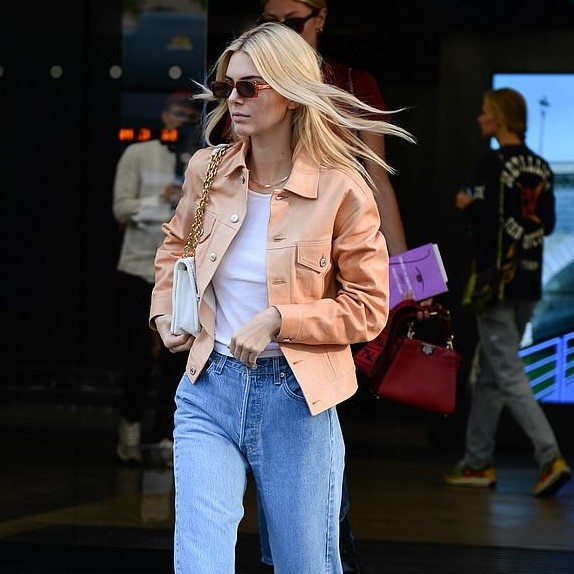 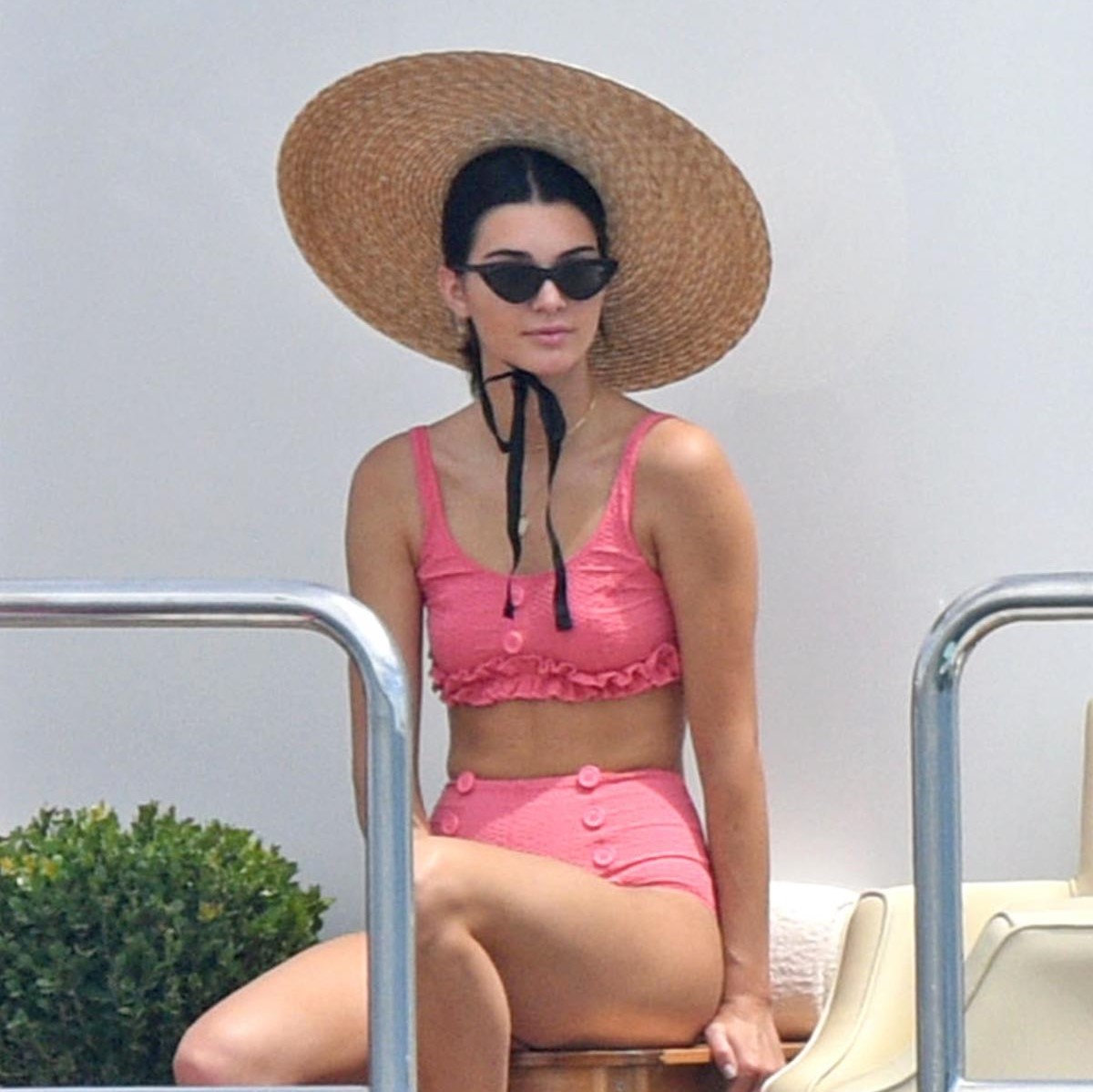 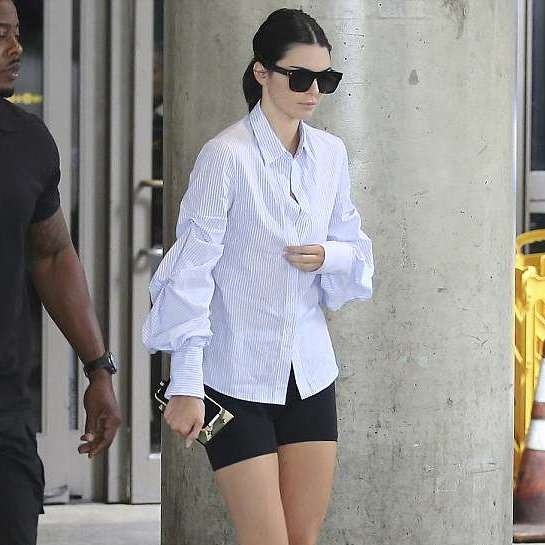 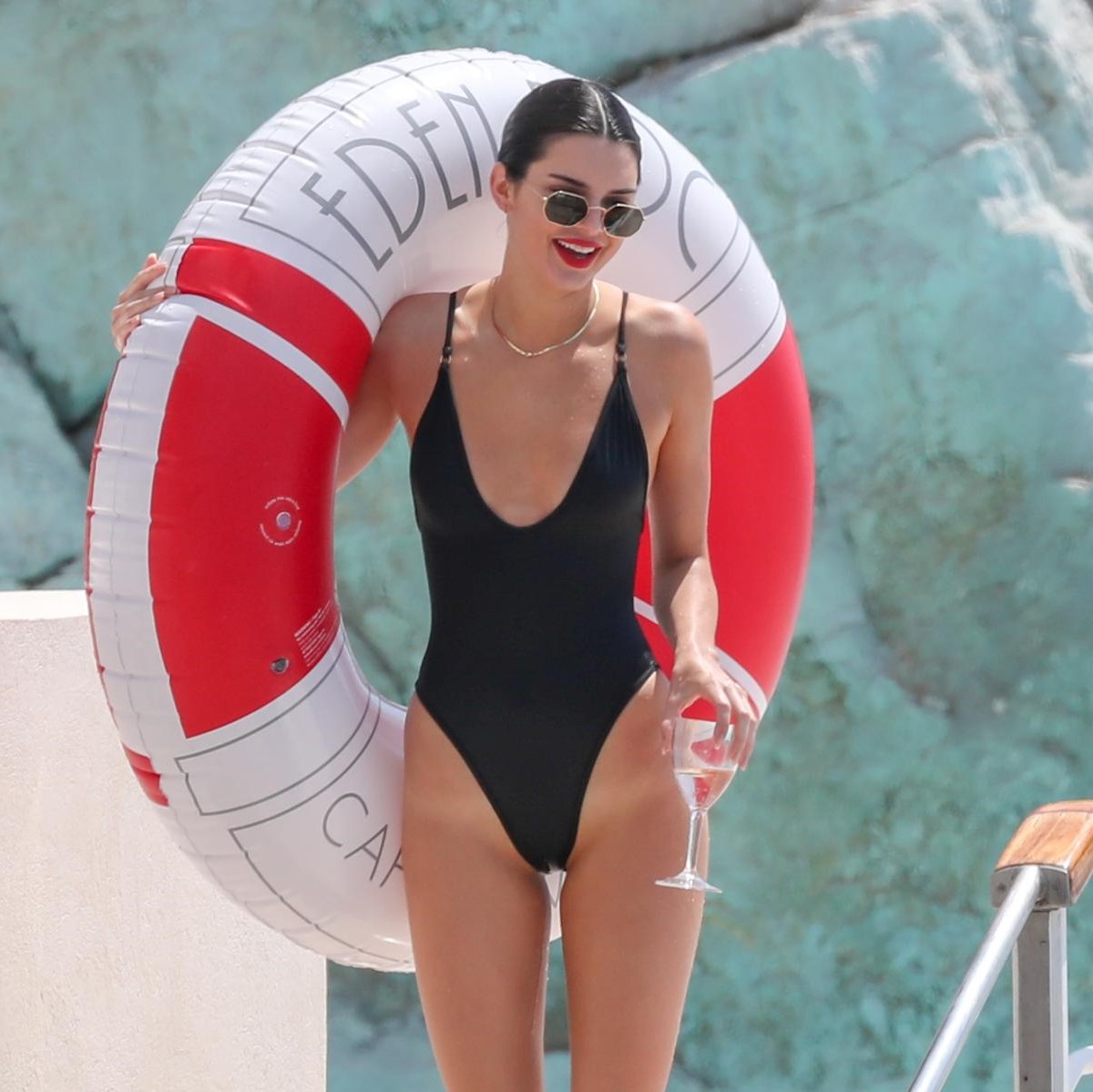 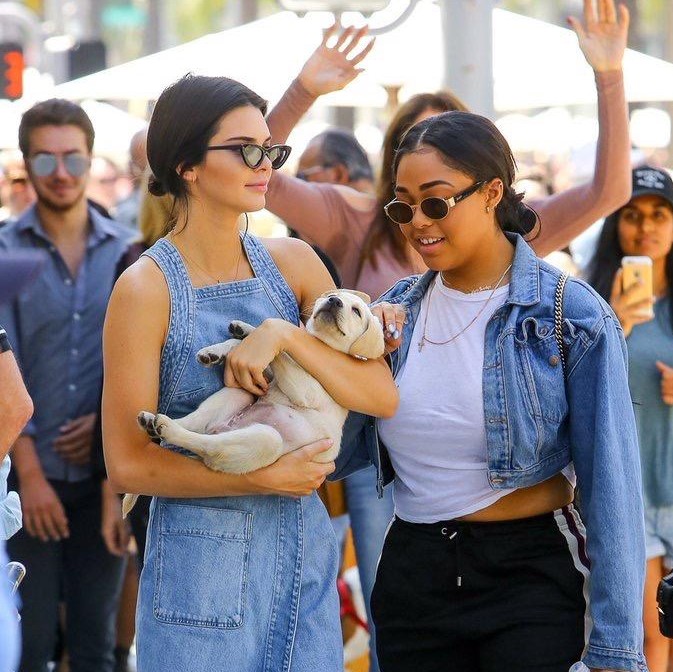 Now you know a bit more about the Jenner side of the Kardashians!