Posted on Oct 02, 2020
Ratched is Ryan Murphy’s latest release on Netflix starring Sarah Paulson, Cynthia Nixon, Sharon Stone, Jon Jon Briones and Finn Wittrock. The series follows the origin story of Nurse Ratched, the iconic character from Ken Kesey’s 1962 novel One Flew Over The Cuckoo’s Nest [adapted for screen by director Miloš Forman]. For those who are not familiar with the story, a brief synopsis of the plot follows Mildred, a nurse who arrives in Northern California seeking employment at a leading psychiatric hospital which has begun experimenting with new and unsettling treatments for psychological ‘illnesses’ concerning the human mind.
Costume designers, Lou Eyrich and Rebecca Guzzi, really make these nurse uniforms more haute couture than hospital confined. Set in the 1940s, the Netflix show takes you back in time with powerful padded shoulders, Bardot necklines, perfect a-line skirts and incredible retro eyewear. We’re going to delve into each character’s style and show you some of our favourite sunglasses and glasses inspired by the vintage pieces featured in the show. 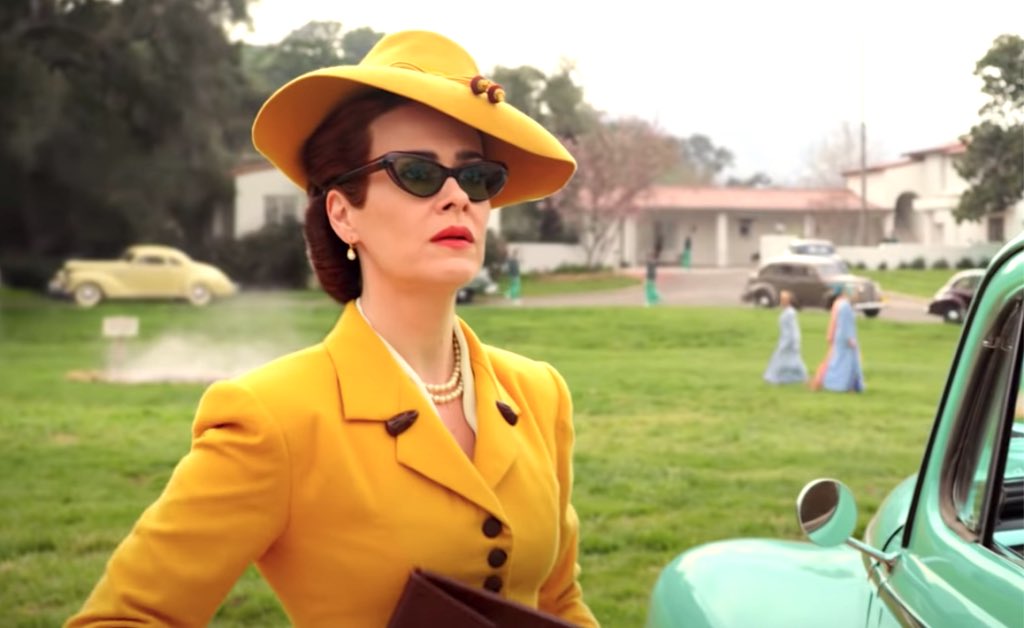 Lou Eyrich and Rebecca Guzzi have used a lot of archived, vintage, couture pieces throughout the series so when narrowing in what exact sunglasses Sarah Paulson is wearing throughout the season we compiled some modern day dupes like the: Oliver Peoples Bianka OV5387SU 1654/P1 (Polarised), L.G.R Orchid 01 Black, Oliver Peoples Zasia OV5379SU 1005/52 and CELINE CL4019IN 53N. 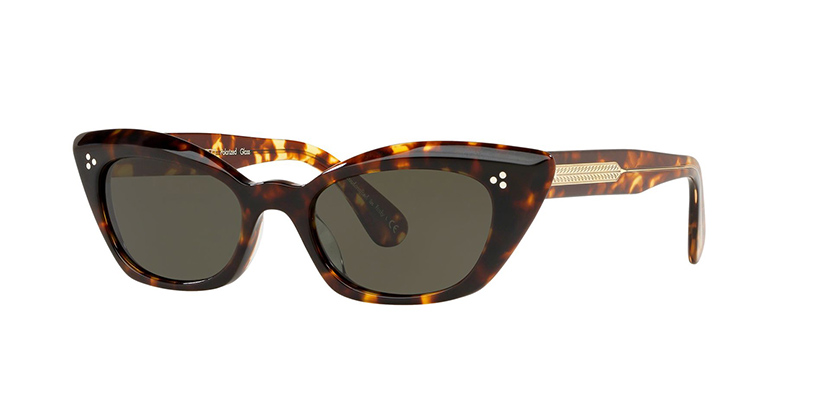 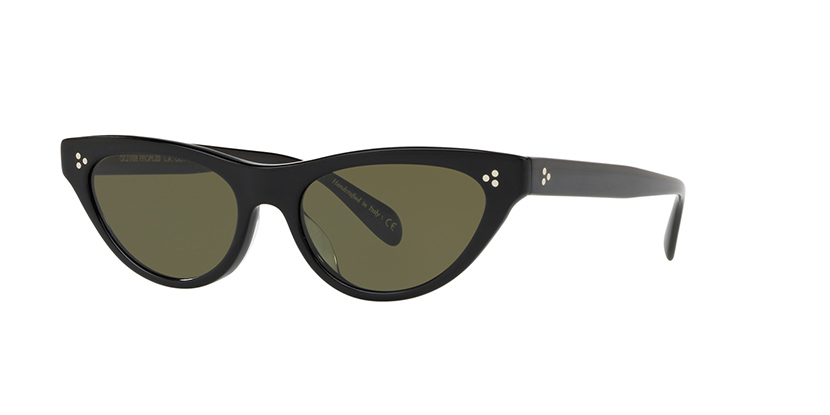 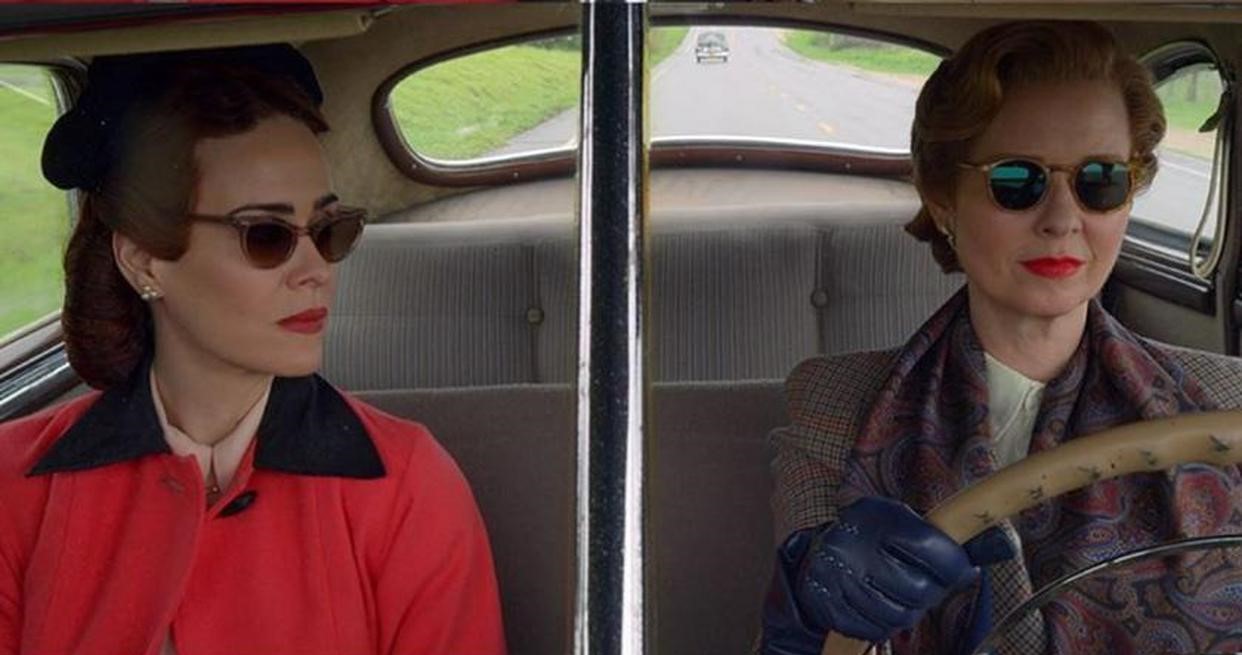 Nurse Ratched meets Cynthia Nixon’s character Gwendolyn who is visiting the hospital along with Governor Milburn. Gwendolyn is his press secretary and is immediately taken with Mildred while on her visit. The romantic connection between the two in the show is watched with great contention due to the 1940s backdrop, and given the fact the institution in question aims to “fix” same-sex attraction.
Cynthia’s wardrobe is more masculine, or as masculine as it can be in 40s America, with two piece suits, tailored shirts, leather gloves and neck scarves all perfectly finished with a striking-red lipstick. Her sunglasses are more of a clubmaster meets round frame style with mirrored lenses like the: Persol Typewriter 3108S 960/S3 Polarised, Ray-Ban Clubmaster RB 3016 1145/17, Oliver People’s Cary Grant 2 OV5436S 1699/52 and the Oliver Peoples Kosa OV5391S 1638/3R Polarised. 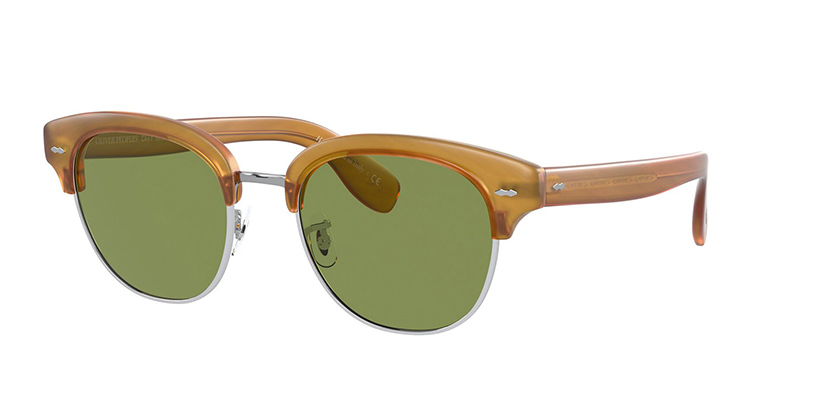 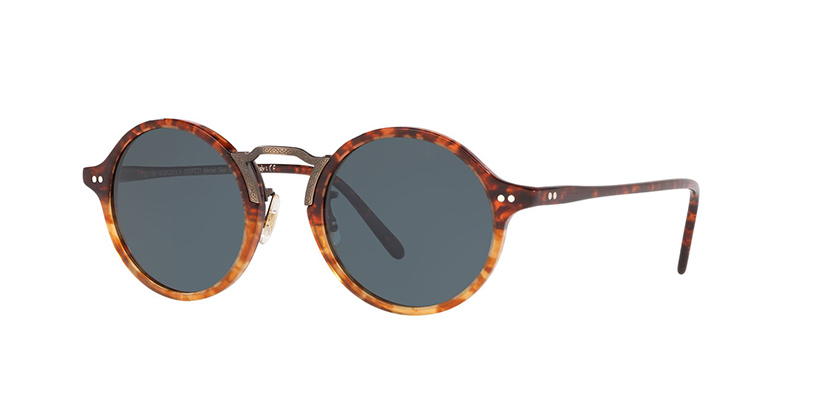 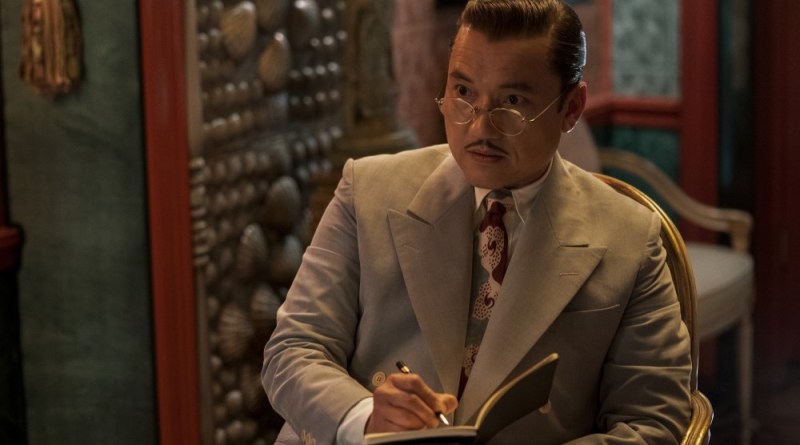 The owner, and head physician, of this much talked about facility is Jon Jon Briones’ character Dr. Richard Hanover. From the outside he appears a calm and collected professional running a highly regarded medical facility but as the show progresses, so does his madness.
His character is often seen in his lab coat in and out of his lecture/operating theatre but within the confines of his office Dr. Hanover’s wardrobe is timelessly chic, composed of meticulously tailored suits and patterned ties. His character wears round optical frames similar to these styles: Dior Stellaire O2 J5G, Gucci GG0337O 001, Savile Row 18kt Round Eye Matte Gold and Ray-Ban Round Metal RB 3447 2500. 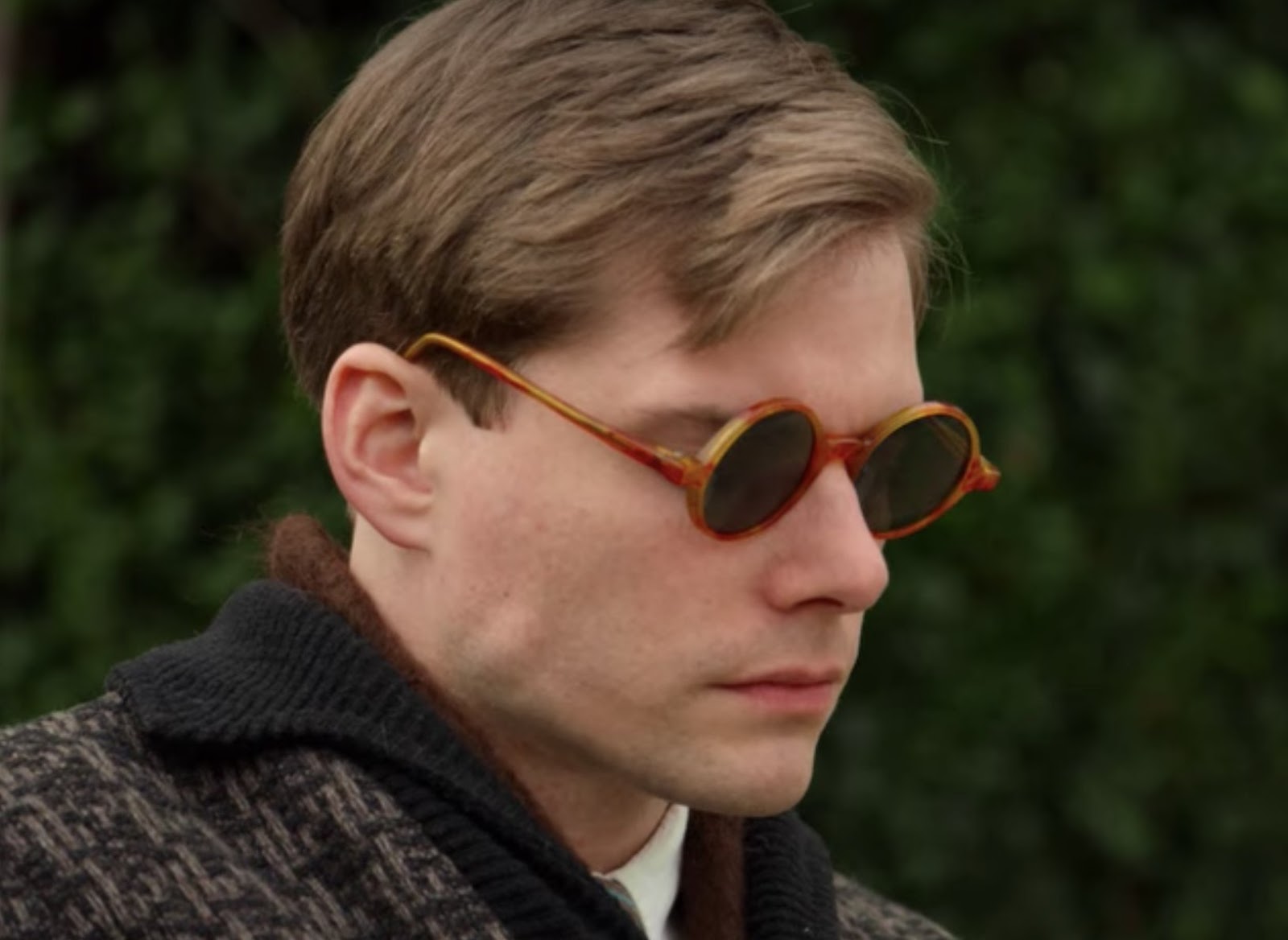 The show opens with a really gruesome murder, leaving one survivor, Father Andrews. As part of the priesthood his costumes are very refined - classic black vest over a crisp white shirt. After witnessing the horrific scenes he is moved and treated at another hospital - not the Lucia Sate Hospital - he is seen in multiple layers of knit and fleece trying to comfort him.
During a visit from Mildred Ratched, Father Andrews is seen sporting these striking round frames with green lenses. We have some similar sunglass styles like the: Oliver Peoples Gregory Peck Sun OV5217S 1483/R8, L.G.R Keren 02 Havana Chiaro, Persol 3092SM 9015/31 and the Moncler ML 0012 48V. 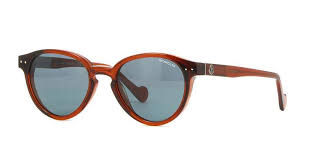 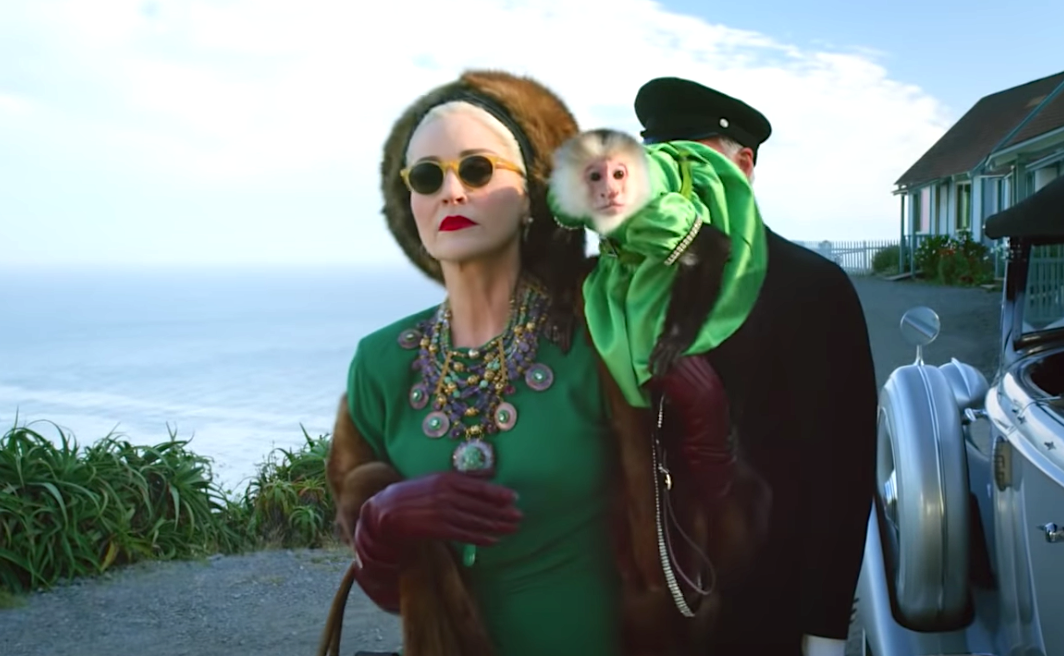 Last but certainly not least is Sharon Stone. Lenore Osgood’s costumes are the most eccentric, opulent and eye-catching in the series. Her character is a heiress with a troubled son and a vendetta against Dr. Hanover.

Lenore is almost always seen with a bright, bold, red lip and numerous diamonds, jewels and precious stones. And yes, even a pet monkey who is equally as well-dressed. Her character decadently parades around in wide-legged trousers, silk blouses and an interesting array of head pieces Lenore's glasses are surprisingly one of the more understated parts of her wardrobe. Similar styles are the: Tom Ford Max-02 TF588 39J, Carrera 143/S 40G9K, Ray-Ban RB 4242  6199/73 and Hype Hypefest 112.

The Netflix Original Series can be described as gritty, depressing and bleak but the fashion is the polar-opposite. Bright, daring and oddly comforting, Ratched explores one of the most sinister villains in movie history, but with that signature Ryan Murphy glamour.

If you wish to find out more about the frames featured in our Ratched shopping edit then please give our team a call on +44 141 552 5065, or email us on hello@pretavoir.co.uk or speak to us on live chat [the red box to the right of the screen].